I myself stopped breeding jellyfish around 2008. The animal park where I worked then stopped exhibiting jellyfish. Therefore, this page is meant to make the data I collected available to people who, professionally or not, want to breed jellyfish.
I can not deliver jellyfish and do not know who can. 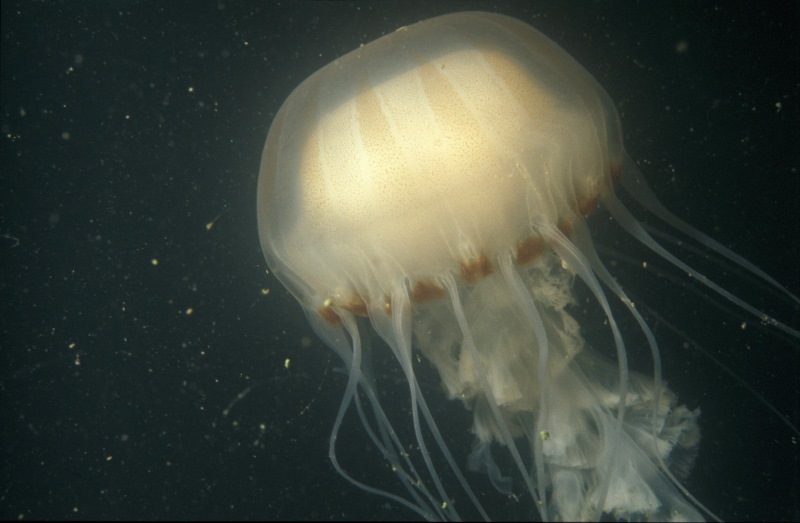 Most people know the jellyfish as dirty piles of mucus on the beach and of the doleful stabbing and especially itchy consequences of touching them when swimming in the sea.
However, if you go diving than you see something quite different, a grandiose beauty, with very elegant movements. If you then on your convenience can view jellyfish in a public aquarium, you should be very insensitive if you not want to be entirely impressed. This happened to me after I could admire the breeding of jellyfish behind the scenes at Aquazoo in Düsseldorf. It turns out that they are not easy to breed successfully and that intrigued me great. Jellyfish do not live long and therefore it is necessary, if you want to exhibit them, to have a good breeding. Phyllorhiza lives a little more than half a year, Aurelia I could keep alive a year and a half.
With much urging I got the Director of the Zoo where I worked so far also to keep jellyfish. After visits to the Berlin Zoo, which has a very good name in the area of jellyfish breeding, I have very much information. And I've been to four other zoos and public aquaria where also jellyfish are bred. From everything I've seen, I've made a design how I wanted to do it. Everywhere you saw smart and also less convenient solutions and there I made a choice. 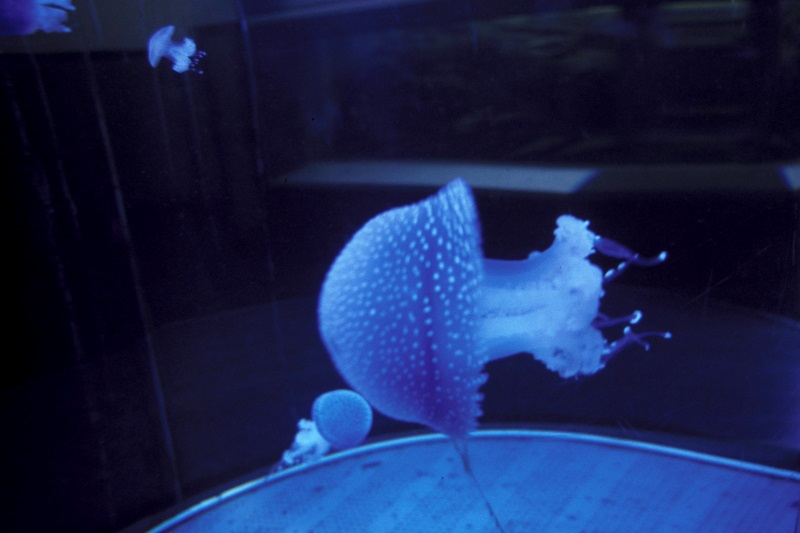 The intention was to start with the tropical Australian spotted jellyfish. This animal is found in the sea around Papua New Gunea. But during a visit to a zoo in the Netherlands I succeed to get some polyps of the moonjelly, Aurelia aurita. When unpacking the polyps in the park, a few days later, there are already found larvae. And there I could exercise to breed them, it was even successfull as well. 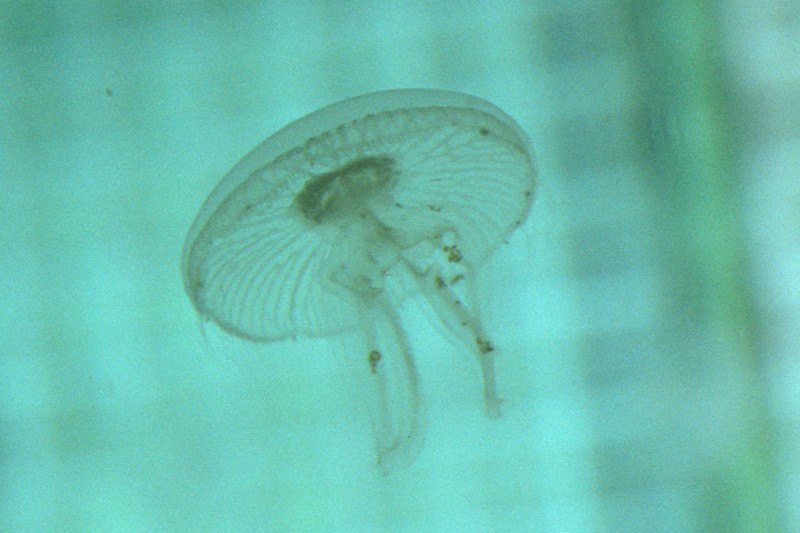 Now a necessary explanation.
Jellyfish have a rather complicated life cycle. There are several stages. The jellyfish as you know them, are actually the reproductive stage. They produce eggs and sperm cells. From the fertilized egg a planula larva apears a free-swimming larva, very small, which attaches itself to a hard surface and then becomes a polyp. These polyps can multiply, by separating pieces of tissue they form new polyps. So if you go diving in Zeeland you often see at the bottom of rocks and oyster shells hang whole curtains of small polyps, they are much smaller than a centimeter. The polyps of the spotted jellyfish are even only a few mm in size.
These polyps can separate larvae, the strobilation of the polyp, these larvae are called ephyrae. The ephyrae may active swim around and make a swimming motion by pulling the edges together. They look like the wheels of an old watch. If it is good this ephyrae grow to a jellyfish. 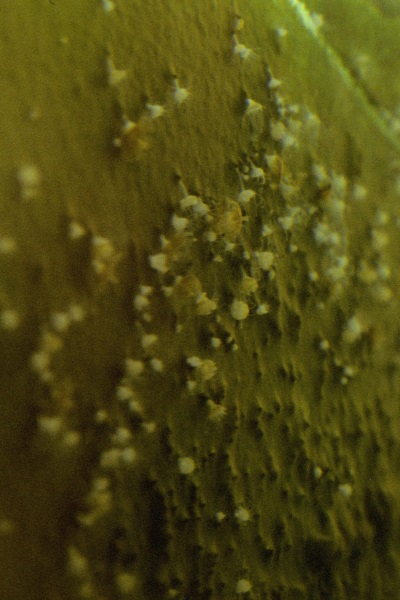 The polyps of the Aurelia aurita produce a whole stack ephyrae, the Phyllorhiza punctata every time but a single ephyra. These are discs that are shut down at the top of the polyp, they fall off, turn around and swim as ephyra (jellyfish larf) away.
To get the polyps of Aurelia aurita so far that they are going to strobilate, you need to give them a cold period first about 10 degrees C, followed by a heat shock 24 degrees C, otherwise they go only multiply and you get no ephyrae. That the temperature affects the whole lives cycle of the jellyfish, also explains that sometimes you see many and sometimes no jellyfish.
The jellyfish itself you can keep at room temperature, 18 to 24 degrees C, a few days warmer or colder is no problem. 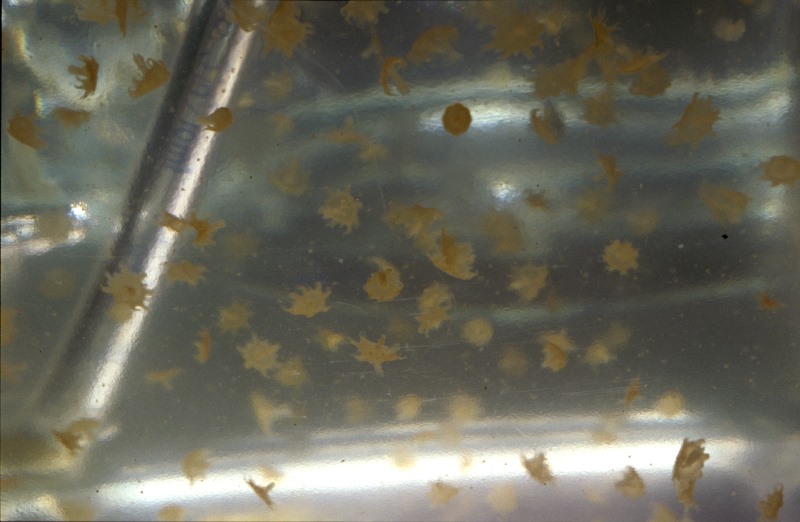 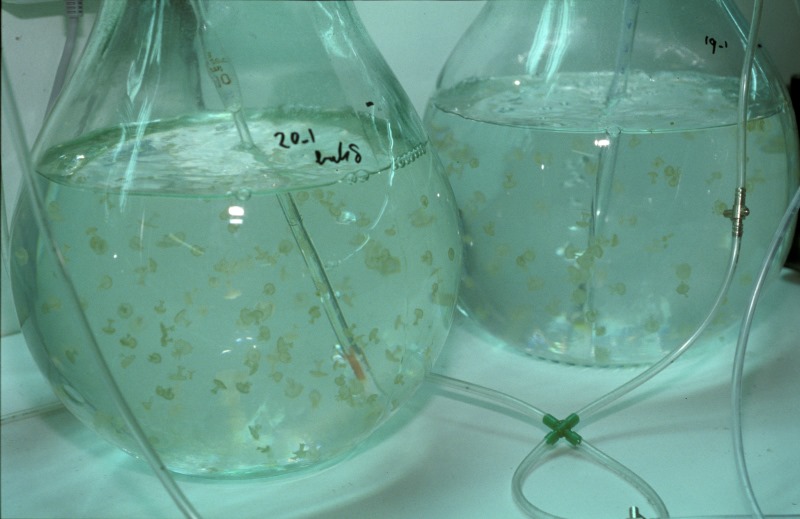 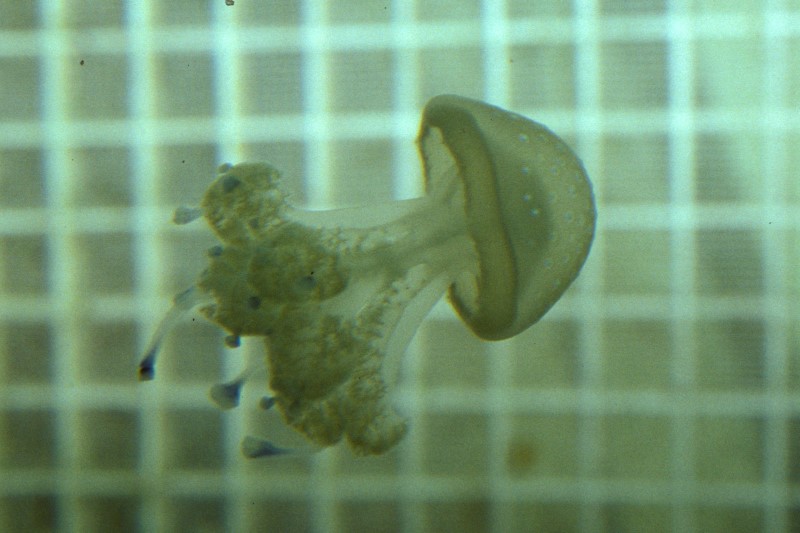 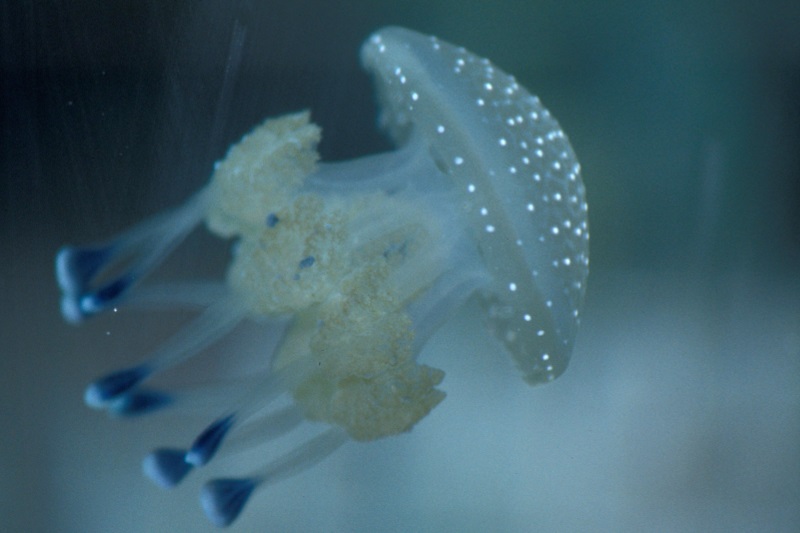 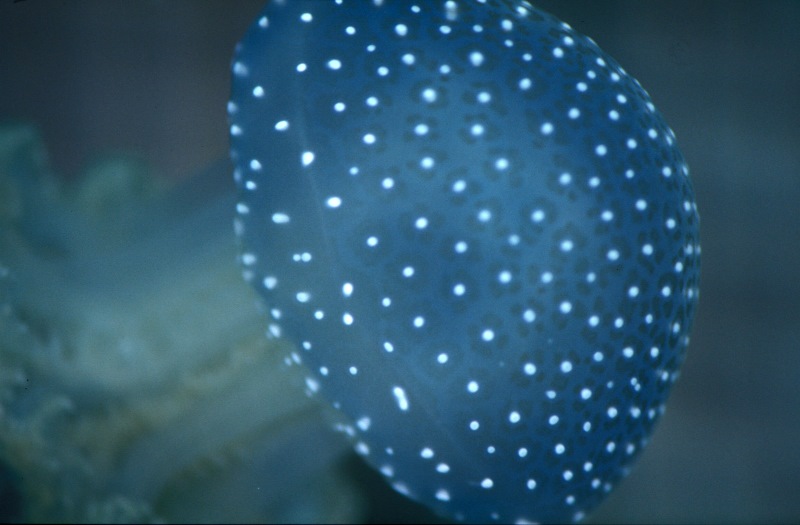 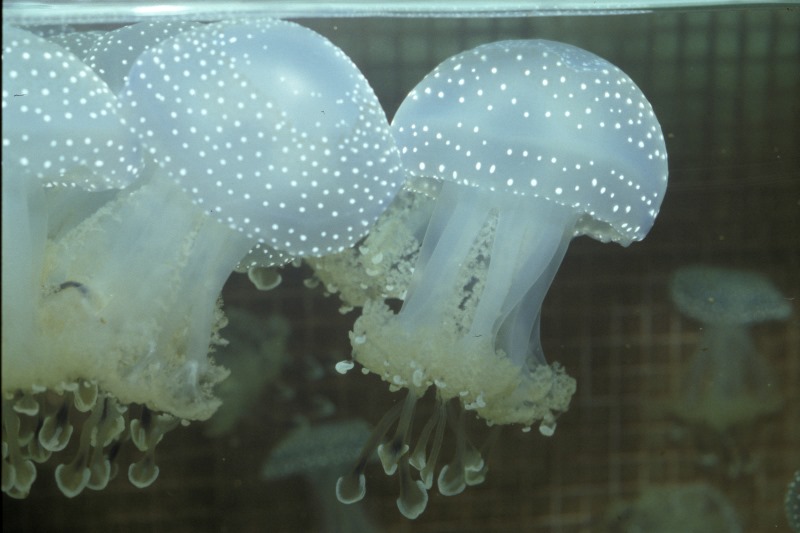 Above I have described how the life cycle of the jellyfish expires. This is as it should be according to the booklet. In practice there jellyfish go their own way. So I started in an aquarium with young spotted jellyfish from the Zoo in Berlin. After a few days it goes completely wrong and die the young jellyfish. I still don't know what the cause of this was. I was very disappointed, just returned from a trip of hundreds of kilometers after a lot of trouble and than this.
After a few weeks I see that the walls of the aquarium ar entirely covered with polyps. Yet a few weeks later they start to strobilate and so the transport is a success anyway. Apparently dying jellyfish can release cells that are able to develop themselves to polyps. Of sexual reproduction can be no question here, the animals were still very young. In many public aquariums it is assumed that the jellyfish sexually reproduce because there come new polyps. According to me, this is totally not so. Even stronger, in a public aquarium I've never seen a jellyfish with eggs. You see that regularly in the sea. 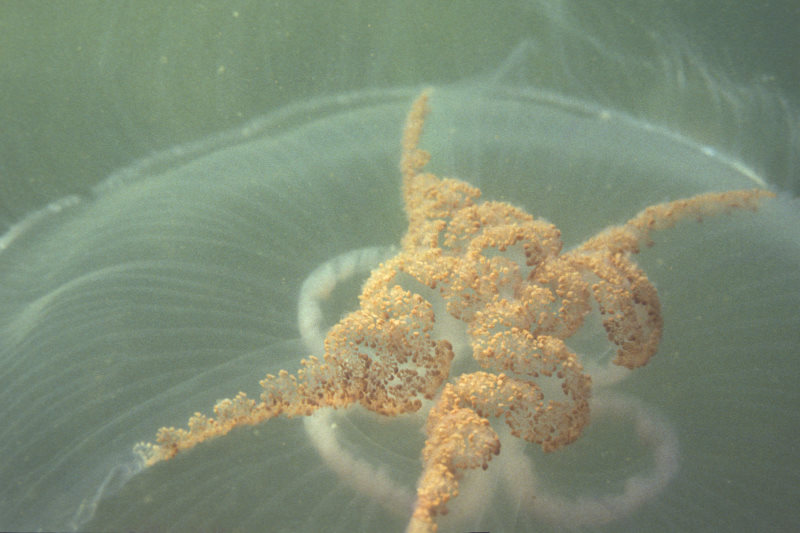 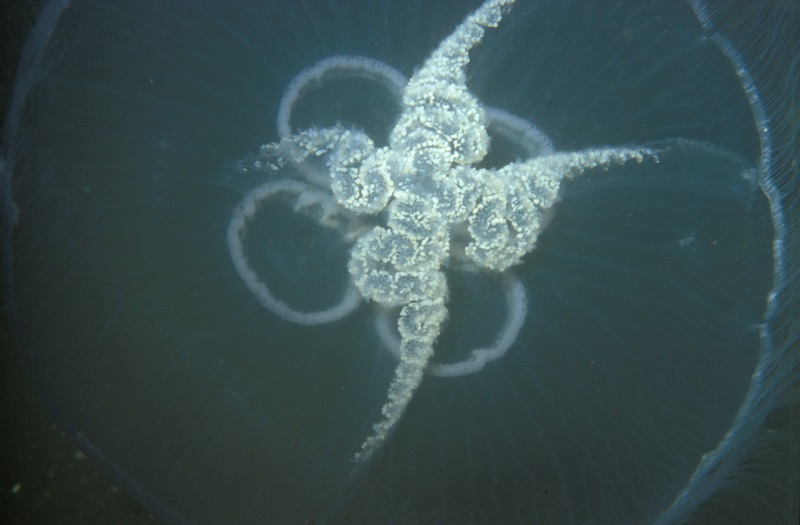 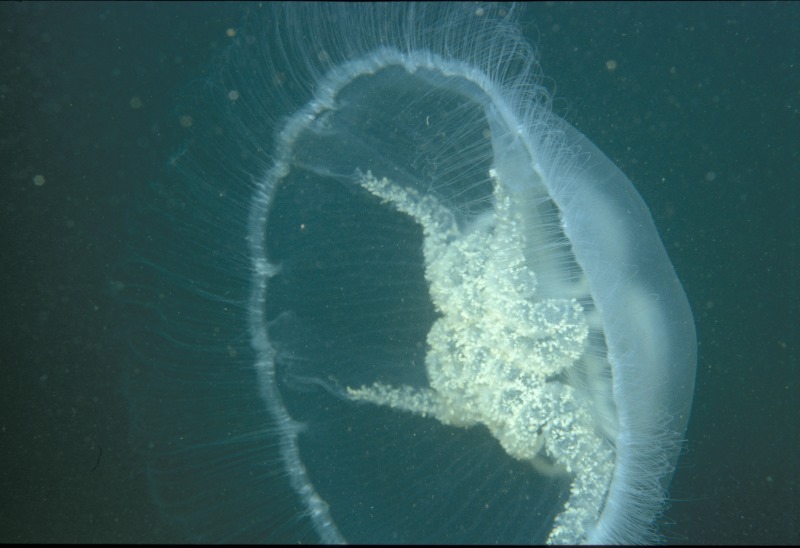 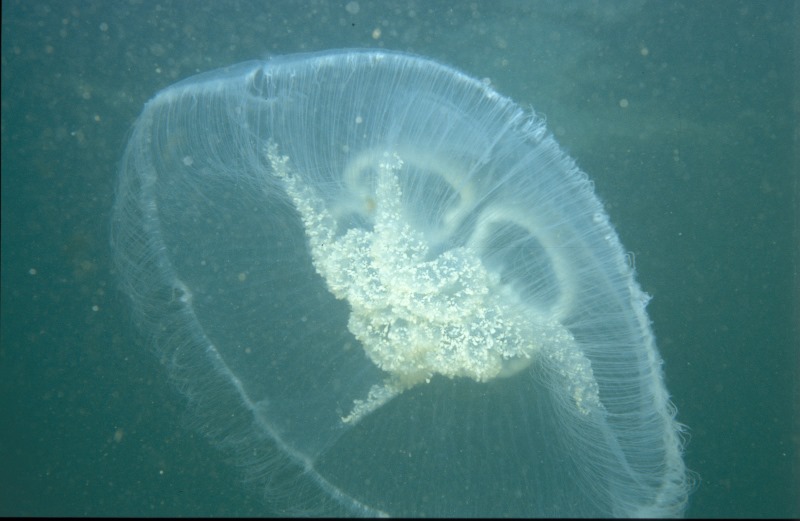 The biggest difficulty in keeping jellyfish is that the animals should always continue to float in the water. This might sound strange, but if a jellyfish comes in stagnant water, most species do not ensure themselves that they continue to float. They go down to the bottom and if they go there for several hours, they remain irrevocably dead. This behavior also occurs in nature, below from two species an unfortunate jellyfish that has come too close to the soil in a piece stagnant water. You see the result, the shape is very soon gone. 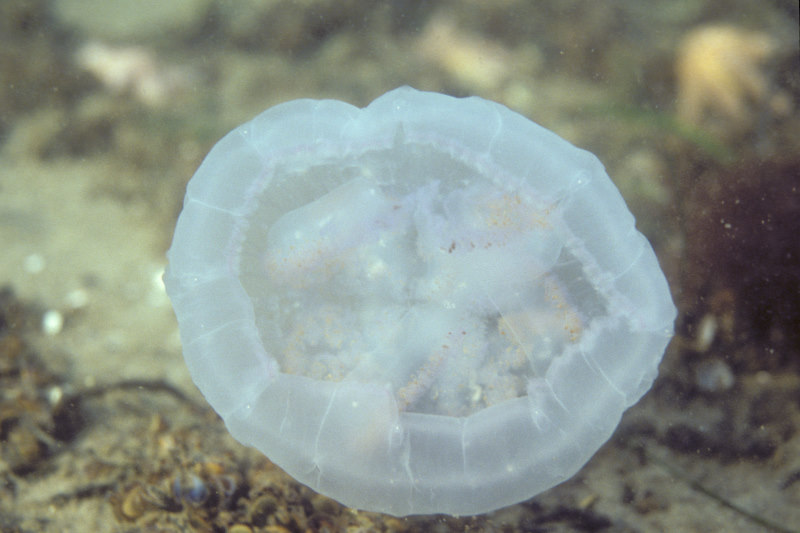 Aurelia aurita on the bottom 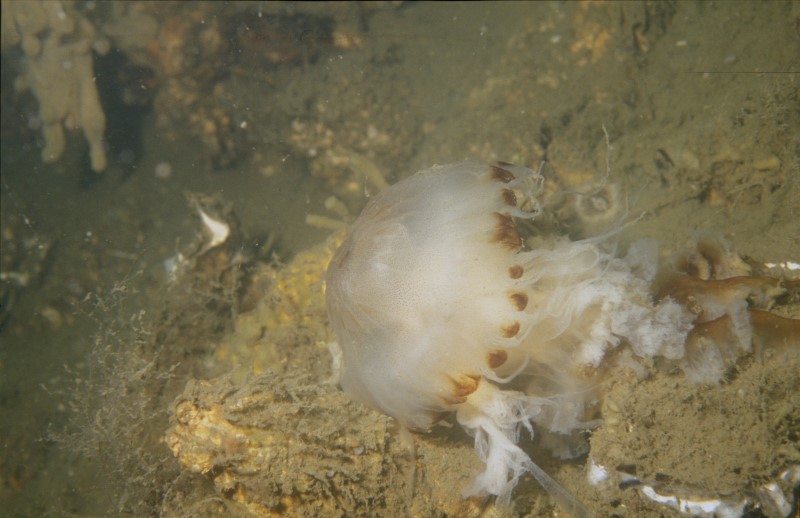 Chrysaora on the bottom 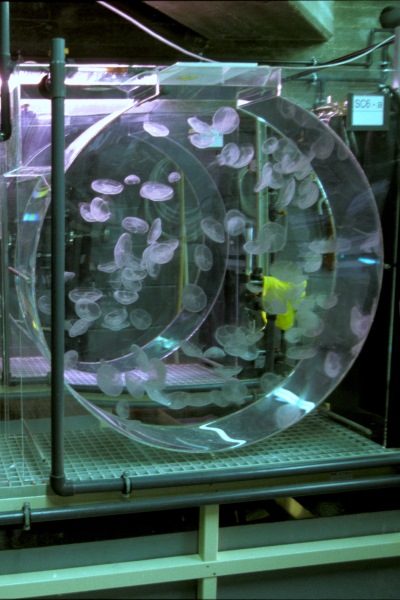 around aquarium in Lisbon

There are devised many solutions to prevent the jellyfish from going down, For the very small jellyfish, it is not a big problem. By letting run a small stream bubbles in a round bowl or in a funnel-shaped tank, the water flows naturally and the jellyfish continue beautiful in solution. You see this system applied to the pictures of the spotted jellyfish ephyrae above. This system is unsuitable for the larger jellyfish. The possibility exists that there is a bubble under the hat of the jellyfish. If this happens, you can see that the bubble goes up, thereby causing a hole in the jellyfish body and leaving behind a disabled or in the worst case a death jellyfish.
The larger jellyfish are held in a kind of washing machines. By providing an aquarium with rounded corners, you can create a circular water flow using a pump. You must be careful that the flow at one point is not too strong otherwise the jellyfish will be teared apart if they come too close. A very very nice and expensive version you see above, picture made in Oceanário de Lisboa (Lisbon Portugal).

Below are two solutions for the problem. They all work well. 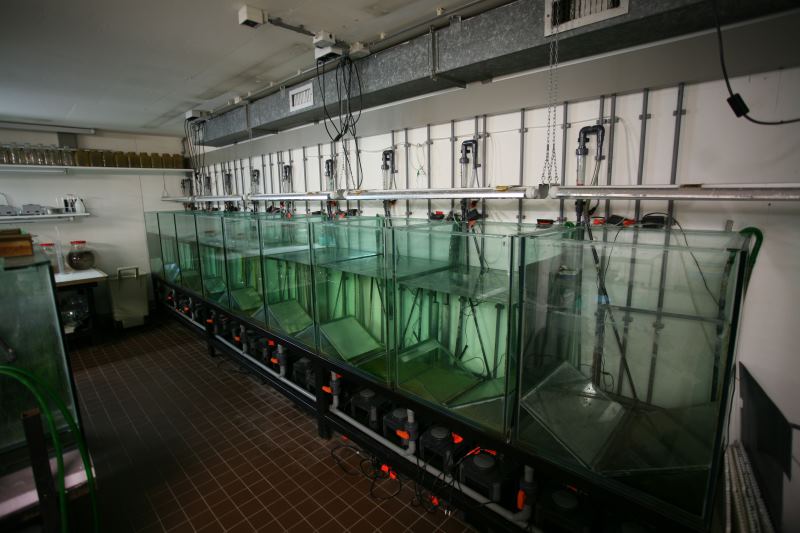 aquariums with rounded bottoms during cleaning 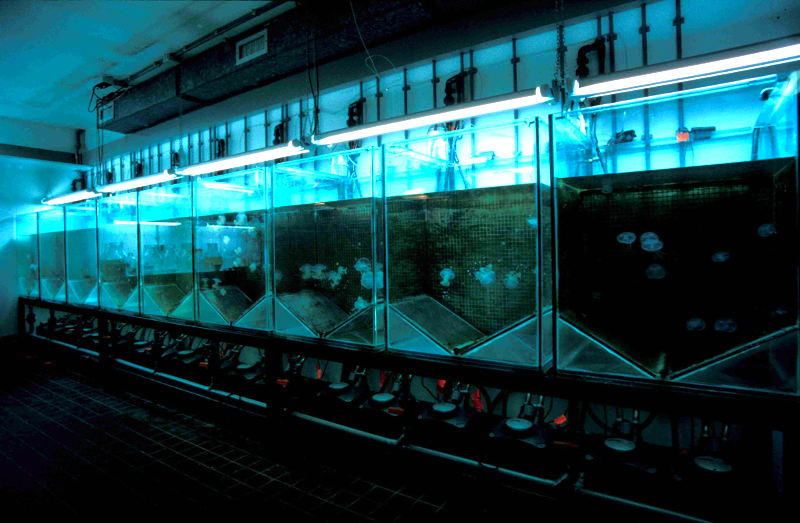 aquariums with rounded bottoms during operation 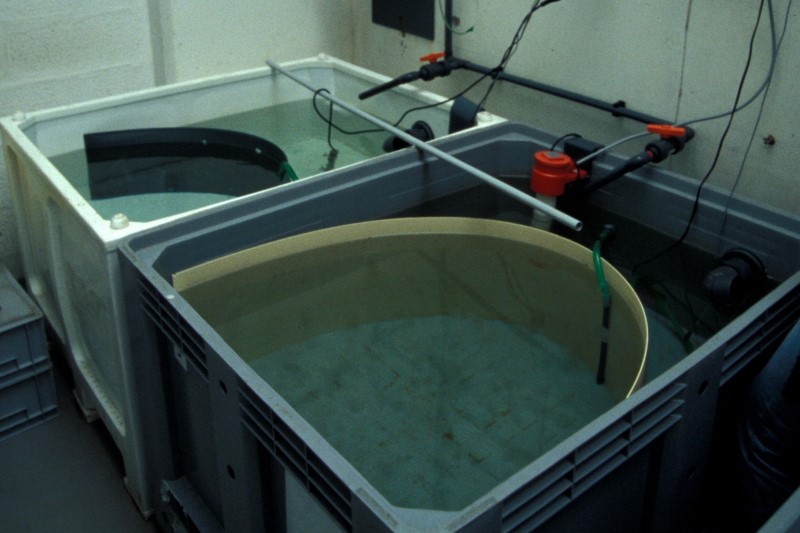 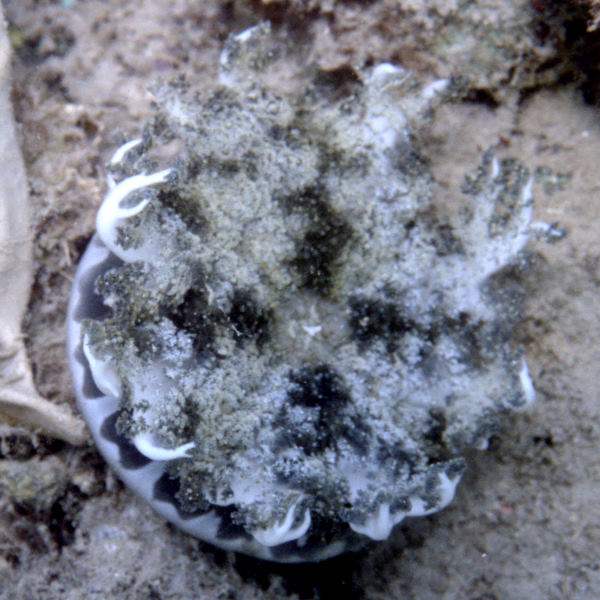 There is one jellyfish that does not matter this whole story: the jellyfish Cassiopea xamachana. In English: Upside down jelly. This animal lies on the ground with his hat and it lies actually on its back. Occasionally it makes also the swimming movement but this presses it only on the ground, though it is provided in this way with fresh environmental water. Very exceptionally, this jellyfish goes also for a little swim. 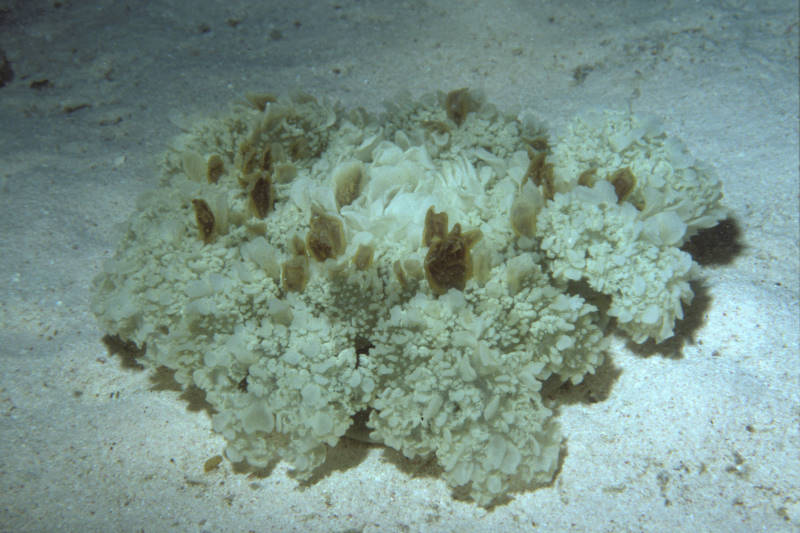 The food of the jellyfish in the culture consists of the larvae of the brine shrimp Artemia spec. At my visit to the Berlin Zoo, I got the information that you had to feed the small ephyrae with Brachionus a single-celled and if the ephyrae grow a bit than also artemia. For the cultivation of brachionus you need algae, so first set up an algae cultivation and grow brachionus before you can start with jellyfish.
I have also done so, but after a few months I see appear in some aquariums jellyfish larvae and also grow without brachionus. With the cumbersome cultivation of algae and brachionus I am stopped and without that it just goes at least as well with only artemia.

There are differend species in The Netherlands. Some of them I'll show you here. 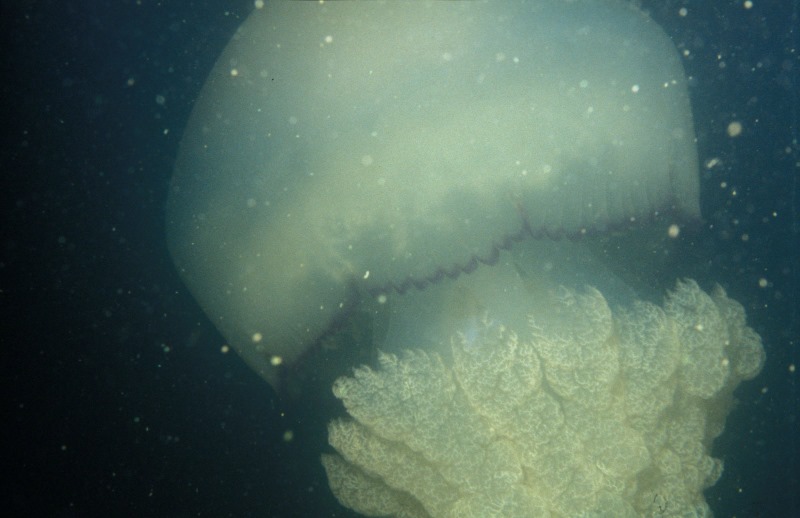 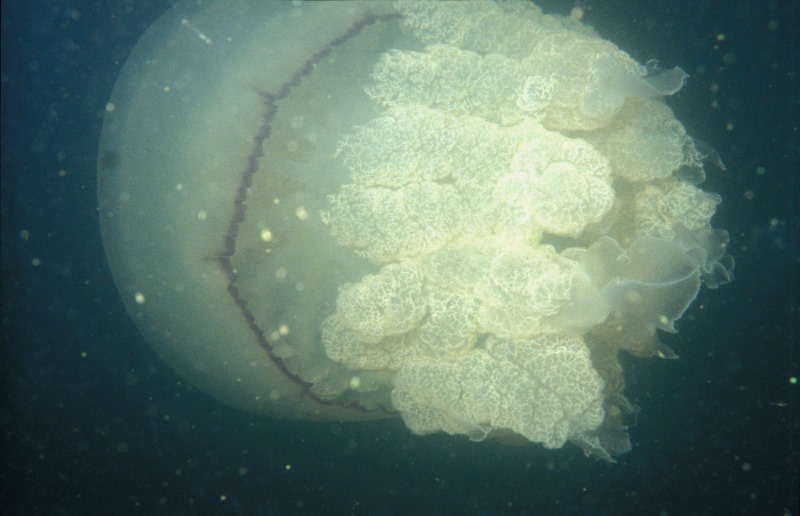 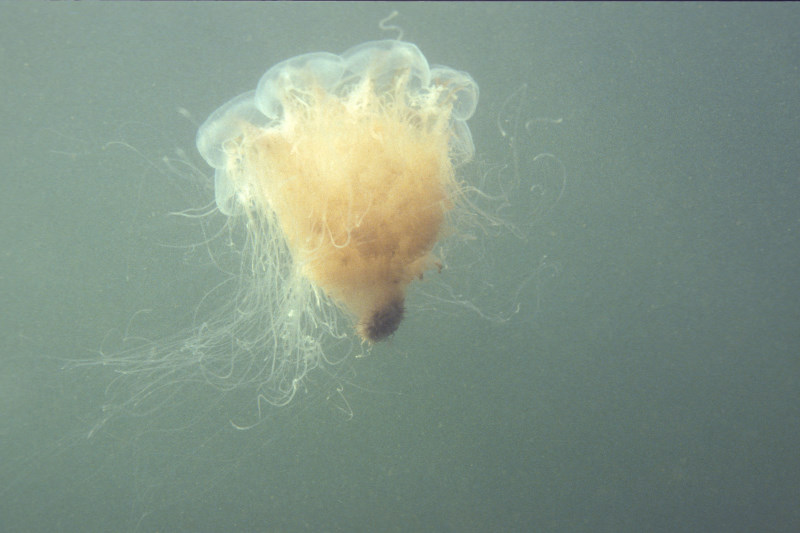 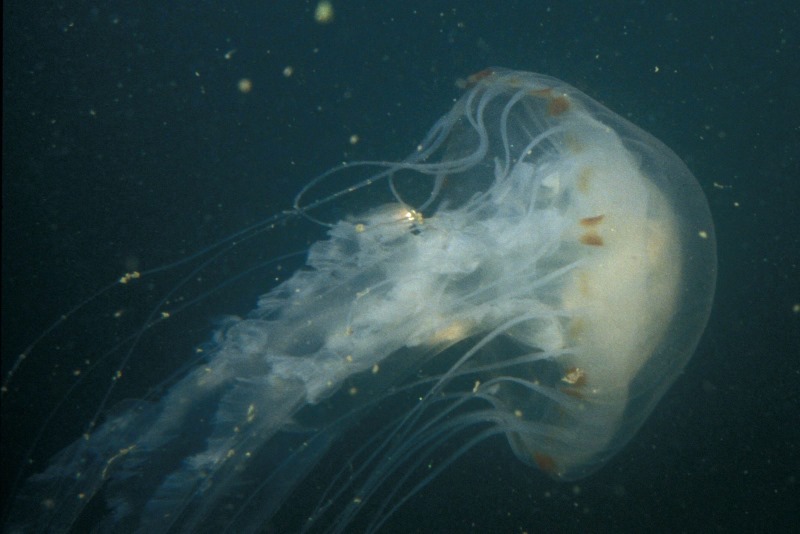 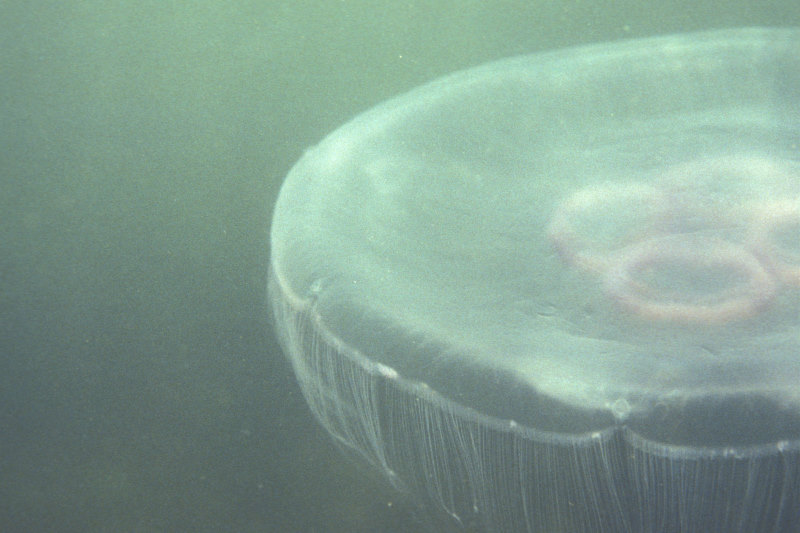 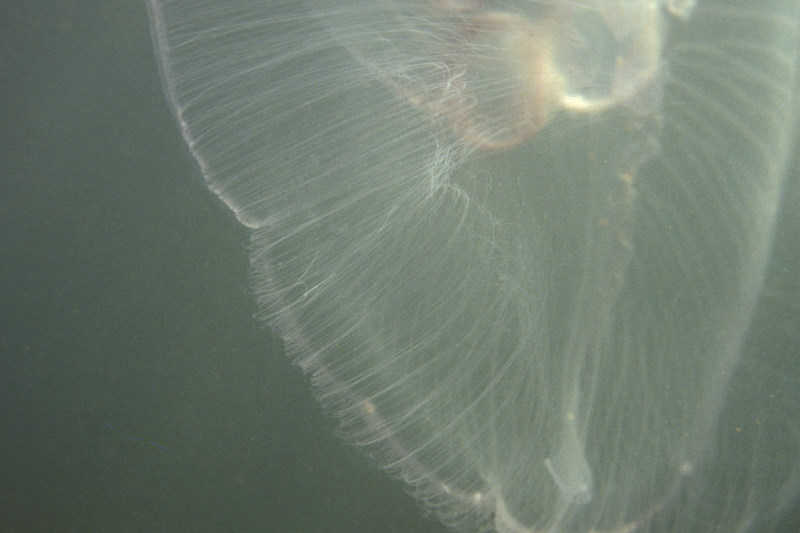 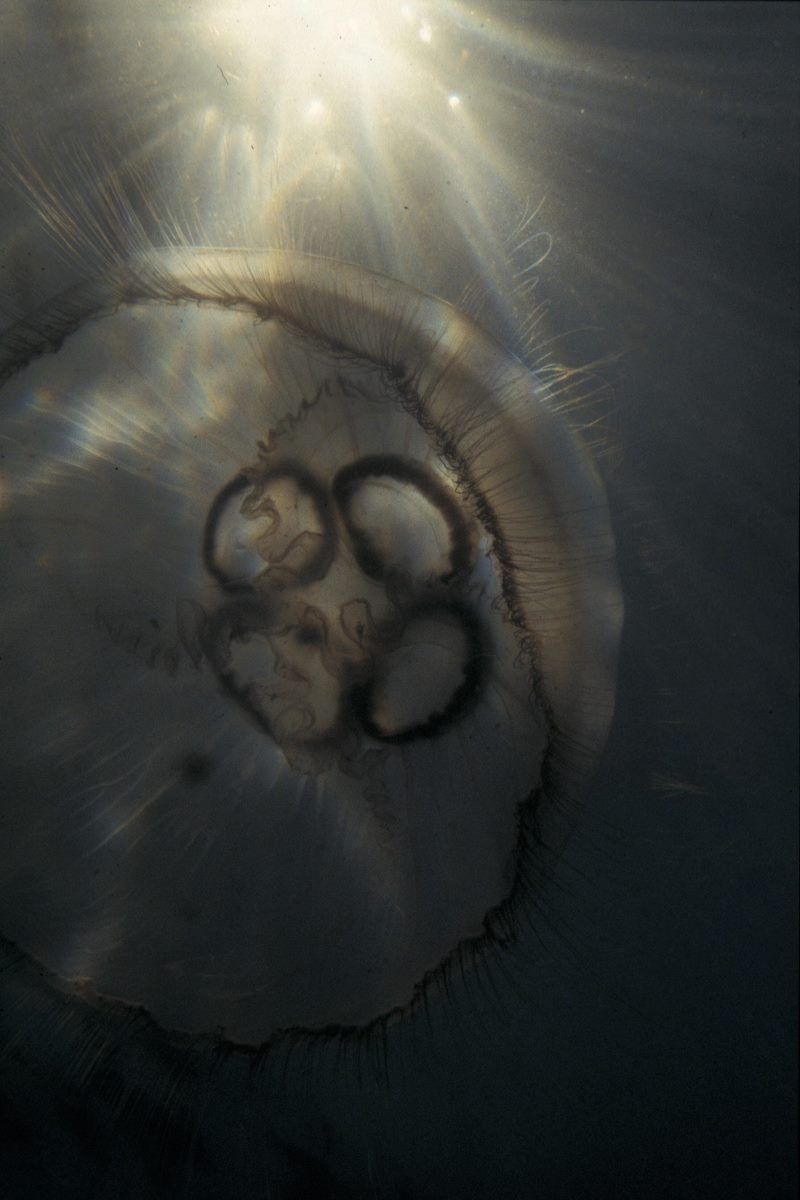